The meeting was attended by 26 people.

Chris took everyone through the Health and Safety briefing for the venue.

2. People's Health Trust Street Action Project
Gaëtane leads on this project.  Nine streets are currently involved with Sandringham and Melfort  joining most recently.  They hold a meeting each month to share what has been done.  In June  2018, 10 more streets will be recruited as the project runs for 2 years.  The funding is from the People's Health Lottery. Two payments have so far been received and all spending has to be justified.  There are specific things which can be paid for.

Mary Cameron shared the experience in Quadrant Road where there is quite a strong interest among the residents.  They have collected signatures to petition for a one way system because of daily problems at the Brigstock Road junction and difficulties turning out of the church when people are trying to turn both ways.  The traffic from Brigstock would turn in to Brook Road and out of Quadrant.  Elliott Road would remain 2-way as it is wider.  The scheme would be subject to Council approval.  Residents would also like a mosaic or mural.

3. Members' Ideas for next year's priorities
The meeting broke into small groups to discuss their ideas.  Key topics fed back were:

4. Helping to Improve Your Street

"Don't Mess with Thornton Heath" Leaflet: This leaflet was developed with the Council after a meeting with Cllr. Stuart Collins.  All the streets marked in pink on the map below have been leafleted and doors knocked, with help of enforcement officers where necessary, eg where recycling is not happening or gardens are unacceptably untidy.  Graham will co-ordinate deliveries in those roads not yet done.  Members who can help should contact Graham.

The scheme seems to be having effect with people ordering replacement bins where necessary and tidying their gardens.  It may be rolled out to other parts of the borough.

Surveillance:Following all our reported conerns the Council undertook secret surveillance in Thornton Heath in August and September and have issued 56 fines for flytipping and other offences and 16 investigations are on-going.  The work is slow and time consuming.

Green Waste: the Green Waste collection scheme will take place all year round from April 2018 and will include picking up Xmas trees from the doorstep.

Street Cleaning: Linda directed members to the Council's Clean and Green Dashboard and Street Cleansing Schedule to find out when street cleaning is timetabled in their street.  (See below after map)

6. THCAT Christmas Tree and CR7 Christmas Market
A Market Sub-Committee has been set up and there is to be a 3 month pilot (one per month) with the first taking place on 16th December.  There will be some stalls outside Ambassador House and more on the High Street to link the whole High Street from Ambassador House to Whitehorse Roundabout.  Many local people are interested in having stalls, Arts, Crafts artisan food etc.  Barbara and Mohammed have been going round local businesses to promote it.  It will provide a different offer from the shops and hopefully bring in trade to the whole High Street.  Stallholders will pay a small fee for the stall and licence fee to the Council.  They will need to have their own insurance.  Anyone interested in having a stall should contact Andrea or Barbara.

The Barber Store will have a Santa Grottos and sleigh and there may be a skating rink (Elizabeth from the Barber Store is organising this).  It will be a real community event running from 10am-4pm.  It has support from Councillors and will need volunteers on the day.  There may be children's Christmas craft workshops at the Salvation Army.

There is a website CR7market.co.uk.  Crowd funding was suggested to help support the market.

The sub-committee intends to purchase 10 good quality stalls so that it looks professional, but some people may have their own.  The Railway Tavern has offered to store the stalls.

Publicity will be important.  We should let schools and churches and local community organisations know.  Vân is designing leaflets, there will be a piece in the Chronicle and banners.

The THCAT Christmas Tree should be set up before this date but the light up ceremony and Carols could be around the time the market end to conclude the day.  Opinion seemed to favour the Clock Tower ove Ambassador House to site the tree.

Thanks were given to the Market Sub-Committee for all their hard work on this project.

Andrea updated on this.  We need to harness people's voices on the High Street.  We are contacting Steve Reed and lobbying the Council re empty shops and Ambassador House.  We have been very proactive in trying to fill shops but the Council's regeneration programme is not effective if it is purely cosmetic and more shops are empty at the end of the process than the beginning.  Shop rents are very high and Landlords seem happy to sit on empty property rather than offering incentives to businesses to take them on.

We need to know why Barclays and Wetherspoons are leaving eg. rents, levels of business.

Jamie suggested we should focus on what can be done.  Andrea has a model letter to send to companies we would like to encourage to come here.  Anyone wanting a copy should contact her.

When Antic did not open at the Thomas Farley, other companies backed off.  They are waiting for someone else to make the first move.  Antic are still interested in coming to Thornton Heath.

Can we get support from Crystal Palace FC?  They say they are interested.  ?Perhaps they could have a merchandise stall.


8.  Any Other Business
a) Parks Meeting Outcomes:

b) Leisure Centre
Issues of poor condition and running of the Centre were raised and the press involved.  Jamie met with the Chief Executive of Fusion, the contractor.  The Operations Director is coming to a public meeting at the Leisure Centre on Tuesday 24th Oct at 6pm.

The Council's monitoring of its contracts needs more rigour.  The Leisure Centre contract ends in April 2018.  It was felt that when THCAT get sinvolved things start to happen.

d) Pete's Planters
£500 has been promised from Stuart King for West Thornton to improve the Pond area.  There will be consultation with nearby residents and a sub-group set up to help once the money has come through.  Daffodils will be planted, planters can be installed next Spring and a Bug Hotel is being built.
On the High Street, two planters are going outside the Barber Store this Sunday. 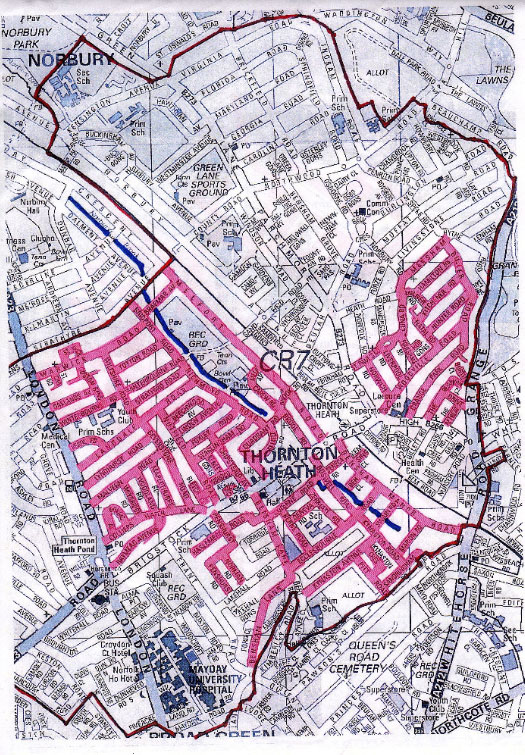